What We Need to Learn From the Left

Conservatives, Constitutionalists, Libertarians and Tea Party members have proven a very important point that I noted nearly a year and a half ago on my Fight for the Right page: that if we understand the tactics of the left and use them effectively against them, we can regain power again. The radical left infiltrated the Democrat party in quite an effective way by using long term thinking, a propaganda strategy and the Alinsky rules for radicals. Now that we have learned that lesson, there is one more lesson we need to learn now in advance: when we do get power, can we govern effectively or will we collapse much in the same way the left is now?

As a political scientist, I have admired the way the left has come into power in this country - not because I'm happy about it, but because they impressed me with their tactics and their ability to cook the Republican frog slowly by getting it into the water. However, they made one mistake in 2008. When they thought the frog was dead, they cranked up the heat to boil the water and the frog jumped out. It is a testament to what I told a friend of mine two years ago: worry about Obama short term (what he will screw up will take 5 years to fix), but don't worry about him long term because he is "wet behind the ears."

The shadow party has been trying to infiltrate our institutions of government for over fifty years. Glenn Beck has done some similar research and presents it on his television show when he talks about the progressive movement. He traces it back further, to the late 1800's. The socialist agenda has always been there. It just never had the hope for change that Barack Obama offered it before. This was its moment to seize.

Barack Obama was sent in on a mission. He was sent in to be a "Manchurian candidate" who was supposed to prep the country for its movement into the 21st century as a European-style Socialist Democracy so that is could eventually be assimilated into a Marxist new world order. We start with the obvious associations with William Ayers, ACORN, Michael Pfleger and Jeremiah Wright. Connect that, along with his associations with Marxists and socialists in college and throughout his life to how he got elected after progressives and Communists infiltrated the Democrat party.

Richard Winger, editor of Ballot Access News wrote "If Obama's candidacy represented nothing more than the spark for this profound initiative to unite the working class and defeat the pernicious influence of racism, it would be a transformative candidacy that would advance progressive politics for the long term."

Greg Ransom points out Obama's praise of his Marxist father in Dreams from My Father.


If there is a mystery at the heart of Barack Obama’s Dreams From My Father, one thing is not left a mystery, the fact that Barack Obama organized his life on the ideals given to him by his Kenyan father. Obama tells us, “All of my life, I carried a single image of my father, one that I .. tried to take as my own.” (p. 220) And what was that image? It was “the father of my dreams, the man in my mother’s stories, full of high-blown ideals ..” (p. 278) What is more, Obama tells us that, “It was into my father’s image .. that I’d packed all the attributes I sought in myself.” And also that, “I did feel that there was something to prove .. to my father” in his efforts at political organizing. (p. 230)

There's a lot more. Read here, here, here and here. For those planning on attending the Restoring Honor Rally at the Lincoln Memorial 8/28, you may also want to read here. Still not convinced? Try this.

As the Republican Party rebuilds itself and tries to learn from the mistakes it made during the 2000s, the Tea Party movement thrives and a compatible coalition forms between libertarians and conservatives. Sentiment is that we will see significant gains in the 2010 election, but that we are still not sure about what to do about 2012. One thing is certain, though. If Obama continues to go the way he is going, we will win then, too.

But where do we go after we win? Do we anger the American people into apathy again by returning to business as usual where a mix of centrist Republicans and conservative Democrats forge alliances to compromise our way out of the hole we're in? No. Do we fire up the liberal base by going radical right by doing something similar to what Obama did and ram our policies down the American people's throats before we've had a chance to present them, obtain consensus and use common sense to determine what our priorities are? Of course not.

Luckily, the Democrats and Obama are making the fatal mistakes we need to learn to avoid. Obama's plummeting poll numbers and the increasing rumbling from the left is another teaching moment for us - only this time in what not to do.

We can be an impressed opposition as to how the left got there. But we must also be wary and honest friends to ourselves about what they did after they got there. Newt Gingrich points out that what made Reagan so great was that he focused in on three areas: the economy and jobs, making Americans feel good about themselves again and defeating the Soviet Union. He said in order to be a good president, you need to focus in on about three or four different areas and not be jumping all over the place like Obama is (from Fox and Friends this morning - transcript not available yet).

Obama's "flavor of the day" approach to governing is not working. Don't take it from us. Take it from the left who are frustrated that he has not been able to get their agenda done as efficiently as they would like. They don't have a problem with the president's policies. They have a problem with his effectiveness in advancing their agenda. This is the same problem that dogged Jimmy Carter at a time when the right was similarly just as unhappy as it is today.

When we win, we are going to have to pass the leadership test. Are we prepared?

The answers are written on Sarah Palin's hand. 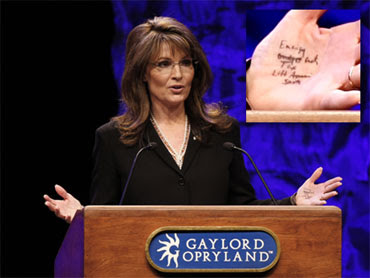 "Energy," "Budget (crossed out) & Tax Cuts" and "Lift Americans Spirits"
If we unleash the industrial giant of America in the area of energy (all of the above, including drilling), the economy will soar. We complain that Obama is borrowing from our children to fund his agenda. But he is also keeping the adults from their resources with drilling moratoriums. If we bring our budget under control and cut taxes, particularly corporate taxes, the economy will soar. If Americans feel good again about the job market and the business and regulatory environment, the economy will soar. It's all common sense. While some ridiculed her for writing on her hand, what she wrote there was pure truth.

We had power under Reagan. We became complacent and let it slip away. We had power under Bush II. We abused it. The next time we have power, we need to keep it by continuing to win hearts and minds after elections, not just before. We will have to destroy liberalism. But all in good time. Do it right this time around and never let it get away from us again and liberalism will die a long and painful death.
Posted by Patrick S. Adams at 2:15 PM