Negativity is like Satan, just waiting to get you in his grasp. No matter how hard you try to remain cheerful, he would be right there, patiently working out some strategy to get you down. - Priya Viswanathan

I want everyone to observe what I'm about to to point out closely. When Glenn Beck held a positive, uplifting, non-political rally where he talked about restoring honor and greatness to America, saluting and supporting our military and encouraging people to renew their relationships with God, he hit the nest. And the demons just flew everywhere.

Yes, we saw the tears in Glenn's and Sarah's eyes. Yes, we heard brilliant and prayerful words from Alveda King. And yes, we left that rally feeling better about ourselves and our nation because we knew we were no longer alone - we had each other and we had God. But Satan doesn't like that and he is roaring out of the gates of hell to reclaim his earthy territory.

Lucifer took to Beau Friedlander's keyboard yesterday and posted a nasty article on the Huffington Post - an article so nasty that even the Huffington Post took it down. He was offering $100,000 for a sex tape or anything that would destroy Glenn Beck's career. How much for that soul again, oh prince of darkness?

Pulling the Huffpo article didn't stop Satan. He also has a platform on MSNBC. "And then God will do magic tricks," Keith Olbermann said mockingly of Beck. Satan also shows up in newsrooms across America with the head count: 87,000 attended the rally. About 500,000 people were actually at the rally and he had no souls to show for it. Of course he's going to skew the numbers.

Since he has unwittingly gotten into the minds of writers at the Daily Kos, MSNBC and the New York Times, Satan leads a busy life. Souls used to be easy to come by when Americans shied away from invoking God in its political discourse. But ever since Glenn Beck and Sarah Palin teamed up and actually talked long enough for the laughing, the mocking and the angry yelling to stop, people actually began to realize that there might just be something to this.

Glenn Beck prayed with Alveda King, niece of civil rights hero Dr. Martin Luther King. So much for the racist angle. What a loss for the great deceiver. Beck was a philandering drunk years ago. That soul was in the bag, or so he thought. But Glenn Beck turned his life around and did something that negative unhappy people cannot stomach: he changed his way of thinking. He found the good and pursued it.

There is something cruel about our nature; and Satan capitalizes on that. The more good someone does, the more crap they take. It's easy to understand why people would just take the money and run. But good people don't do that. They persevere. They do things because of a higher calling. And those who envy them can either be happy for them, aspire to be like them or they can hate them for juxtaposing that success next to their own miserable personal failures.

No good deed goes unpunished. Expect the beatings to only get worse for Glenn and Sarah. Why? Because they are only getting better and stronger with each passing day. This will not sit well with Satan. 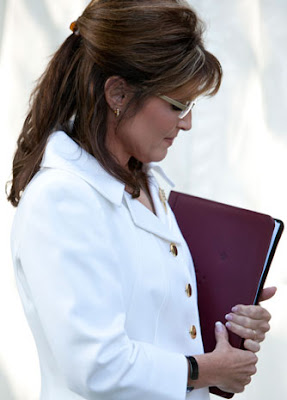 Word around the internet (Glenn himself may have started this) is that Sarah Palin prayed for ten minutes before giving her speech. Who in their right mind can possibly hate this woman? Disagree with her politically? Fine. But hate her? Come on!

This is the same woman who is vilified by hateful negative people who want to do nothing but tear her down. They wrote lies that were read on national news shows to destroy her vice presidential candidacy. They filed unfounded frivolous ethics complaints that destroyed her governorship. They lied about her children and they lied about her marriage.

A friend of mine texted me while I was writing this article. He couldn't understand why CNN was tearing Palin down. Do you want to know why this is happening? Want to know why Palin's unfavorables are still high? Just ask Satan to explain how he uses the media to plant those demons of doubt and dislike into the minds of unsuspecting independents who will tell you they don't think Sarah Palin can be president yet can't really explain why.

I asked two friends of mine on Long Island why people in New York don't like Sarah Palin. One said he thinks it's because she kills turkeys or something. The other thinks Palin personally gets into helicopters and shoots wolves for sport.

The truth burns negative people like holy water and in their anguish they poison people like my friends in New York. Every miserable dead-butt in America keeps buying into it. They project their misery onto people like Beck and Palin instead of facing themselves in the mirror and seeing their own inadequacies.

Glenn Beck scalded the Devil with his positive God loving words Saturday. The demonic dragon is now angered by the pain and breathes more fire and life into the ugliness that makes up the darkest recesses of the souls who cannot look at that picture above and feel love. The fight for the country will require more resolve, more steel spines and more faith than ever before because of this. But, as Sarah Palin told us Saturday, we can do it.

The negative people described in this article and the rest of the Beck and Palin haters don't wake up in the morning and say "ah, I'm going to find Satan today and become evil." It doesn't work that way. Satan finds them. Satan is the car in your blind spot. He is that piece of broken glass that cuts you before you see it. If you don't know he's there, he will get you by default. We must always stay on our toes.

Those haters are fellow human beings who need our prayers. They are unknowingly and unwillingly Satan's puppets. The evil spew that they direct at Sarah Palin and Glenn Beck is like the puke that comes from Linda Blair's mouth in The Exorcist. The holy water burns and they must refute or have their miserable world views refuted.