Sarah Palin is Intelligent and Competent

The media just loves breaking Sarah Palin's chops. Politifact.com and the St. Petersburg Times thought that they would just shoot Sarah Palin down and instead they got shot down themselves. Sarah Palin writes on her Facebook page:


Yesterday, PolitiFact.com fact-checked my statement about the coming $3.8 trillion Obama tax hike – the largest tax increase in history. They did such a bad job of it, however, that I feel compelled to fact-check the fact-checkers.

The media and the left, which have been so intent on proving that Sarah Palin is an idiot or she doesn't know policy, must have gotten blurry vision after the shellacking they took from her and the Daily Caller in the last few weeks. Like a staggered boxer who punches at the air and helplessly flails at the opponent, the media and the left stupidly showcases an incident where Sarah Palin was intelligent and knew her policy in a deperate attempt to belittle her. They end up getting clobbered by another Facebook note in the process.

Check out the articles that were written even after Palin told the Fox News Sunday audience that she had her facts and figures with her so she wouldn't "get dinged, you know, by the -- by the liberals saying I didn't know what I was talking about." It was a pre-emptive strike and yet the liberals in the moronosphere still went after it like silly cats who can't help but to go after the dangling yarn string every time.

The left is showing how discombobulated they are now.

Palin researched the issue and probably re-researched it again to rebut Politifact. The liberals and the media can whine all they want about her "lack of knowledge." But the truth is, she thoroughly researched this issue. When she pulled out her facts and figures, she showed them up. When she wrote on her hand, she was intentionlly mocking them. That's what they really didn't like.

They're not splitting hairs over trillions of dollars in "alleged" tax hikes. They're dinged. They got smacked by Sarah Palin good so they smacked her. Then she smacked them back even harder. The monster is growing too big now and the liberals can't stop it.

This is just the beginning. The left is getting frustrated by their inability to get their agenda through, and its showing. They used to hit Palin in her blind spots and get away with free shots before the shields went up. But now they are becoming so unbalanced that they aren't even capable of mounting an effective attack anymore. Many of them are begrudgingly accepting the fact that Palin is intelligent and competent now that the "she's dumb" meme has failed. 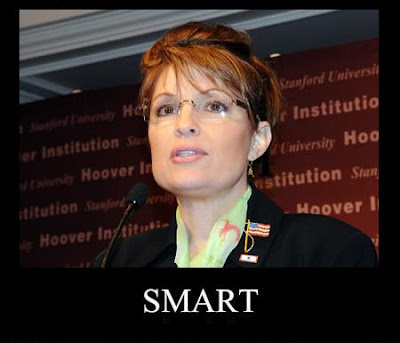 My late father said you could sell crap if you put it in the right bag. The media and the left sold America tons of horse manure by packaging it in the right Obama bags in 2008. Sarah Palin simply rips the bag open and shows the American people what they bought. When that happens, the left and the media go nuts. How dare she expose them for the morally and intellectually bankrupt ideologues that they really are.
Posted by Patrick S. Adams at 1:25 PM