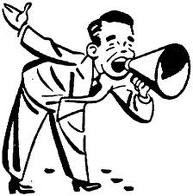 Top Twit
Shannyn Moore complains that Sarah Palin "quit." Wasn't it Shannyn Moore who wanted her out in the first place? After all, she was an active participant in the left wing media smear campaign against her and supported with her writing the numerous frivolous ethics complaints that cost the state of Alaska millions of dollars which resulted in the resignation. Sometimes you just can't make these liberal loons happy no matter what you do.

The lamestream media is too busy talking about Eureka college to notice that Obama said "Twitters." If I was Sarah Palin, I'd tell those "smart asses" to stop being so negative. For crying out loud, it's an honest mistake. Eureka college could be in any one of the 57 states!

Al Gore thought he'd go for a quick massage before groping the American people and trying to shove his talk of global warming down our throats. Crazed climate change poodle!

The lamestream media spent a lot of time looking at Sarah Palin's boobs. But they never once looked into why, after 50 days, the president had not spoken to BP CEO Tony Hayward.

Obama created a bunch of jobs but none of the Senate candidates took them.

4/21/10 - Palin Warrior of the Week is SE Cupp for standing up for Sarah Palin on the Joy Behar show and sticking it to Ron Reagan for his stupid criticism of her.

4/13/10 - Palin Warrior of the Week is Jedediah Bila for her outstanding article at The Daily Caller. She should also get a Matthew Continetti award as well.

Sarah Palin, Kick Ass at SRLC! She did.

We're going to have to come up with a Palin Warrior of the Week Award. The first one would go to Laura Ingraham who cleaned Matt Lauer's clock over media coverage of Palin and the Tea Party "violence." Check out Laura setting Matt Lauer straight. Does anyone remember when Palin herself set Matt Lauer straight?

Hidden message at the page listings at the top of my page. Can you figure out what the 45 means?

We can still win this thing in November and ultimately 2012. Keep the faith!

Ronald Reagan quote: This is the issue of this election: Whether we believe in our capacity for self-government or whether we abandon the American revolution and confess that a little intellectual elite in a far-distant capitol can plan our lives for us better than we can plan them ourselves.

Media Fraud!
It's no longer media malpractice. It's media Fraud. It doesn't matter if a story's implications are based on a lie. Folks have already read them, the minds have already been poisoned by them and the advertisers have already paid for them. What's the big deal if a retraction has to be posted later as long as there is enough doubt placed out there in people's minds about Sarah Palin.

Retracto, The Correction Alpaca is keeping them straight thanks to Andrew Breitbart.
Tammy Bruce rule:

See Tammy Bruce's web page. The picture of the pig is great! Sarah Palin wrote on her Facebook page: "This is what you might call putting 'perfume on a pig.'"

Rahm Emanuel, how long has the Democrat party known about Eric Massa's sexual misconduct with a male staffer?  So this is how Democrat politics works? You cover up for your cronies until one of them doesn't play ball? Then you throw them under a bus? I got it now.

Juan Williams is a sexist pig. His lowest moment ever as a Fox News contributor. Texas4Palin agrees.

Conservatives4Palin.com slammed the Alaska bloggers. It couldn't happen to a seedier group of whining negative disillusioned deadbutts. Texas4Palin.com followed suit with an excellent quote and link to a perfect article on the blog site A Time For Choosing. I had to chime in as well.

Immoral Minority reports that Shannyn Moore, who complains that Sarah Palin is a liar, will have, well... a liar on her radio show. According to Gryphen, Moore was scheduled Friday Mar 6 to interview the guy who told the Daily Kos that NBC added a laugh track to Palin's appearance on Leno. The crackpot who made the claim that he flew thousands of miles round trip to see the show. He also attacked me on Twitter and then blocked his tweets after I tweeted him a link where NBC debunks his story! Looney bin time.

Elizabeth Hasselback let Evan Bayh have it on The View after "lack of" Joy Behar had to bring up Sarah Palin. Apparently Senator Bayh sees the writing on the hand and realizes it's either quit or get his ass kicked in the next election.

I second Sarah Palin's tweet:  "@GlennBeck hit the nail on the head in his #CPAC speech: USA is the abiding beacon of freedom & we need 'less Marx, more Madison'!"

Bob McDonnell: Cut, baby, cut. Virginia's great governor takes out the ax and is ready to bring the commonwealth's budget back into line.

All of MSNBC's whitest people are claiming the Tea Party is a bunch of angry white men. Okay, Keith Olbermann has a spray tan, but he's still technically white.

Notice the African American to the left and the Asian guy over the shoulder
Obama, One and Done! In surprise speech, Cheney says Obama will last one term.