The Battle Is Between Palin and Obama

Rush Limbaugh said "They will tell you who they fear." Today's journalism lesson comes straight out of the textbook. It's no secret that conservatives have had it out for Barack Obama (he lost us at paragraph 8 of his inauguration speech with "worn out dogmas")  and that he is our political enemy. But while conservatives and Republicans focus on 2010 and the under the surface infighting over potential 2012 nominees has not hit the top of the water yet, the liberals already know who their political enemy is. Just as The Daily Caller has no problem with going after Obama, the Huffington Post has no problem with going after Palin. Why? Because whether some want to understand this or not, these are the people who represent the battle for America. 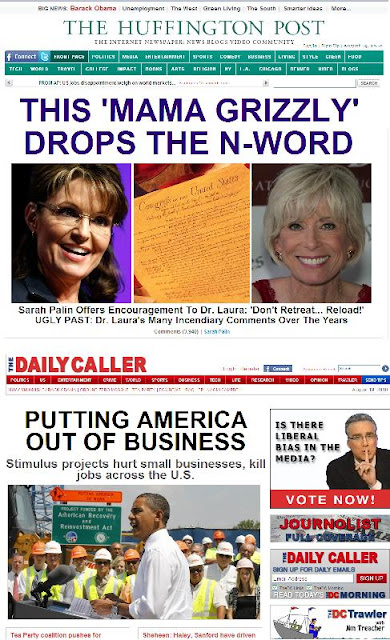 On the liberal side, the Huffington Post spends most of its time "refudiating" Sarah Palin for her use of certain words or her support for certain people (in this case, Dr. Laura). And like middle schoolers, they have learned how to go from muddled English class to fuzzy math class with the ease of a student who knows his locker combination by heart.

This is the same "cackle" of intellectual acrobats who can just as easily find some deep hidden meaning in an eye roll as they are capable of taking a four way tie for the GOP 2012 nomination and twisting it into a story about how Palin is sinking in the polls by pulling some numbers out of their butts while conceding for all the wrong reasons that the poll numbers don't mean anything come time for the actual campaigns. It's easy to tell why The Huffington Post is good at crunching the numbers, though, because as the comment count shows, they are getting a good response from the feeble minded readers who easily "misunderestimate" Sarah Palin's poll numbers like lemmings who would follow Arianna off on a plane ride to nowhere and a death that no one should ever wish for.

On the other side, we see the Daily Caller. Unlike the Huffington Post, the Daily Caller focuses on issues. Barack Obama may be a closet Muslim or a Kenyan national with no birth right to the presidency. He is either so heterosexual that he has affairs with the likes of Vera Baker or he is so gay that he has frequented bath houses in Chicago in the past. But rather than dress up in bear costumes and poke fun at his vernacular or hand the editorial pages over to those on our side who their side would consider wingnuts, the Daily Caller actually wears out the soles on their shoes and employs writers who can substantiate a policy argument with facts and supporting logic while knowing all along that debunking the Obama myth doesn't require a half baked story about where he was born to get the nestling birds to open their mouths and take the worm.

Herein lies the difference between our two sides.

For liberals, it's all about the personal (Sarah Palin is the mean girl in the high school class because she doesn't agree that I have a right to make up stories about FBI investigations that don't exist). It's all about the anger (how dare Sarah Palin support women who are pro life). It's all about deflecting from the truth so as to keep the progressive agenda alive even as it crumbles under the lack of foundation for its simple minded arguments dressed up as sophistication.


Have you noticed how liberals always seize upon the trivial and the gossip column stuff in their more recent attacks on Gov. Palin? We're pretty sure there's a reason for it. The left can't battle her on the issues, so they go into full deflection mode, always shifting the focus from what's on the minds of the great majority of voters away to all manner of things everyday Americans couldn't care about less.

For conservatives, it really is all about the intellectual. Why else would conservatives be portrayed as dumb and backwards. If they really were, there would no need to paint a picture over a photograph. The truth, like facts, is a pesky little problem for the left. And it is the one area that conservatives have the edge. While the great thinkers of the progressive movement like to tout their intellectual superiority over the masses, the fact of the matter is they are really just a bunch of idiots who condescend to not only their enemies but to their own by using big words and twisted policy positions based on some fabricated notion of social justice or feigned outrage over people or animals dying because some president was incapable of being the Almighty. Pay no attention to the moron behind the curtain. Yet, Sarah Palin can communicate more truth and logic in one misspelled, abbreviated and truncated tweet that has to be mangled so as to fit the 140 character restrictions of Twitter than they can by having their greatest minds, John Kerry and Barbara Boxer, combine their "intellectual firepower" to put out an op ed disputing her position on climate change legislation.

Why the long face, John? A standing Senator with a pedigree that would make Thurston Howell III look like trailer trash got his butt kicked on Facebook by some redneck from Wasilla? You betcha.

Who are the real intellects here? Sarah Palin's knowledge of oil and energy issues in Alaska qualifies her as the nation's leading expert on the subject. But tell a liberal that and they fall to pieces and break out the "hide the genius" spray paint so that they can cloak Palin's intelligence in a false narrative about her "dumbness."

To spend hours debating with liberals on issues is exhausting, given the number of times they will dodge the issue and attack your intelligence. We can all save time by boiling it down to Frasier Crane on Cheers when he asked "tell me, what color is the sky in your world?" Imagine the debate you would get. The Daily Caller would have to uncover emails and secretly tape conversations between conspirators on the left to prove that they were secretly working to fudge the data to convince us that the sky is purple.

What conservatives are doing in todays political environment is the equivalent of debunking the myth that the sky is not blue. The shame is that it will take four years to fix the mess the media got us into in the first place. It was their presidential candidate who wanted to lead us off the cliff to financial ruin, not ours as they contended. It was their vice presidential candidate who was the gaffe machine who provided us with the verbal fodder befitting a true airhead caricature, not ours. Yet, in this Alice in Wonderland-like world of politics, up is down and inside out is rightside in. Or as Sarah Palin would say, "it's backassward."
Posted by Patrick S. Adams at 10:55 AM