I love Dick Morris and Andrea Tantaros. Don't get me wrong. These two have defended Sarah Palin rather vigorously in the past. Their credentials with this section of the Palin army remain intact. They are great conservatives. However, they are also political analysts who have concluded that although unwarranted and unfair, the toll the media and left wing smear campaign has taken on Sarah Palin hurts her viability as a presidential candidate.


Though many believe she's set her sights on the White House in 2012, Palin ...would be far more influential as a talk show host than she would be as a presidential candidate...

I say this not because Palin is incapable of being an impactful politician, but because she has been profoundly hindered by the left's hateful and perplexing obsession with demeaning and destroying her at all costs.


But Sarah comes with a lot of baggage, largely the doing of the liberal, sexist media. It will be tough to beat Obama. It will be tougher still to do so while overcoming her negatives, however unjustified they may be.

Both writers articulate a thought that has been going around as of late. Their writing of it is not the first I've heard of it, but their articles are the best written examples of it.

As analysts, they are doing their job in pointing this out to us. However, they also fall prey in their opinion to the hidden germ that the mainstream media and the left has spread and until now has gone undetected.

We all know that most people are beginning to figure out that the media lies. People know that Sarah Palin is not getting divorced, hasn't gotten breast implants, is the mother of Trig and is not guilty of the ethics violations filed against her while governor of Alaska. Yes, I still have friends who think Sarah Palin shoots wolves from helicopters and the best one yet: she kills turkeys. Unfortunately, the girl who thinks she shoots wolves is a liberal and the turkey guy watches Joy Behar. This proves my point that there is nothing you can do about the kool aid drinkers. But there is still hope for winning over those who right now sit on that "yeah, I like Sarah Palin, but..." fence.

The hidden germ is the notion that Palin's numbers are just not there for a successful presidential bid because of the damage the media and the left has done to her. And that is the germ the media and the left have really been trying to spread. They don't care that you don't believe their lies about Sarah Palin. They only care that they've told enough of them, astroturfed the blogosphere enough and gotten in zing after zing in the mainstream media so that you buy into the illusion that yeah, these stories are lies, but if there are that many people who don't like her, she can't win.

And if you cave like Tantaros or Morris, they win.

Like I said, I love both writers. I just want them to understand that fighting for the right means sticking it to the mainstream media and the left and giving them their worst nightmare rather than letting them dictate a sidestep to what the real narrative should be: answering the question whether Palin has been working hard to get herself up to speed for the job and can she earn the right to the presidency with more hard work and a good solid campaign in the primaries. Let's not write her off so fast because of the stupid media attacks.

Let's take a quote out of Townhall and understand where we're really headed with Sarah Palin.


Though try as they might to silence her—with attacks on everything from her outspoken criticism of the current administration to her bra size—Palin is a light that will not be snuffed out. Much to the chagrin of the liberal elites and leftist reformists, Palin’s down-to-earth independence, patriotic spirit and nononsense can-do attitude will only continue to propel her popularity.

Now that's more like it. That's the courageous conservatism I like to see from my friends on the right. 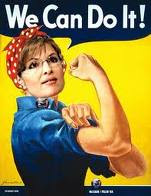 If anything, we should elect Sarah Palin president just on G.P. Regardless of how strongly you feel about Sarah Palin, if you hate liberalism there would be nothing worse, no deeper a wound, than for the left and the mainstream media to watch President Palin take the oath of office in 2013.

H/t to Texas4Palin for the Townhall article.
Posted by Patrick S. Adams at 5:27 PM