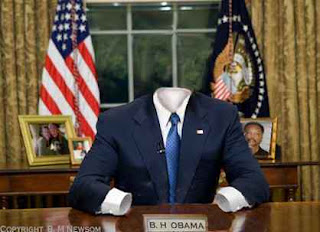 Welcome to the new look of Patrick's World USA. Today's post was going to be on Obama's speech last night, but the picture tells a thousand words. A hat tip to Sentryman on Team Sarah for the picture and for the laughing fit I experienced for about 15 minutes after I saw it.

It is my goal to truly bring the reader into my world, Patrick's World, and see what the Shining City on a Hill looks like from someone who lived during the Reagan years.

One quick point I want to touch on is the vast contrast between Obama's message last night and Palin's message. While there is a lot in the speech to be covered by other bloggers and pundits (particularly the cap and tax stuff the president alluded to last night), there is one thing I picked up that Doug Brady at Conservatives4Palin also picked up on: government versus the private sector.

The president wants the government to use cap and trade as a tax to pay for the acceleration of our transition to non-carbon based sources of energy. In essence, he wants to try to game nature and the laws of economics so that he can get his "green way." He wants the government to increase the cost of "old energy" by creating a fictional product called the carbon credit and then having crony companies market the carbon credits which are attached to old energy. It's an elaborate scheme. "Brokers" can earn money like stockbrokers and brokerage houses do with real stock and the government can skim off this racket to pay for green jobs - government green jobs.

After listening to what Governor Palin had to say last night it hit me. Mr. President, environmental whackos, crooks in the waiting and the American left, I have a better idea. Actually, Sarah Palin has the better idea. Why not let the market dictate how energy is developed? Why not allow the forces of economics, not the barriers of government bureaucracy lead us to get companies involved in energy development? Why not waive the Jones act and start returning phone calls to companies that are begging to help. They have all the equipment we need to contain the spill and they should have been circling the spill site with booms and skimmers since day 3.

And greenies, if you want to get us over to alternative renewables, I'm with you. I would love to see you take the outheld hand that awaits government funding and put it back on the grindstone where it belongs and start building companies and preparing an entrepreneurial and capitalist road toward green development. The day green development starts to work is the day green people tell the government "I don't want a handout; I don't want bureaucratic red tape; but I do want a free and capital filled business environment from which to draw, earn, borrow and have folks invest the funds that I will need to make Barack Obama's dream of a green USA come true.

There is a right way they can go about doing that. But they're not going about it the right way.

Oh, and by the way. The reason we're drilling in deeper and deeper water is not because we are running out of oil on land or in shallow water as the president said. It's because we are being prevented from tapping into that oil by the government. Mr. President, that line in the speech was a crock.


Please tell your friends about my page. Please take a look to the left sidebar to see if your page is on there. Is my page linked on your page? If so, and you are not linked on mine, please shoot me an email at reagantman@gmail.com or hit me up on Twitter @ReaganTMan. Let's get the word out.
Posted by Patrick S. Adams at 1:17 PM