If We Fight, The Future is Bright (Updated)

As we journey toward our future, we take solace in one great notion: socialism and statism is a failure. We laugh at those who want to marginalize us, call us out of touch or old school. We're busting a gut over how ironic it is that their philosophy has never succeeded, yet ours was called an outmoded dogma with tired arguments. We get what Obama calls our failed theories from reading "extremist right wing" literature such as the Bible, the Declaration of Independence and the U.S. Constitution. Yeah, we're a bunch of far right reactionaries, the far right fringe as some would call us. We derive our values from the writings and speeches of such far right extremists as Patrick Henry, George Washington, Samuel Adams, Thomas Jefferson and Abraham Lincoln.

I guess we're just not as sophisticated as the left wing. They poo poo our reading list. For these are the people whose philosophy and values are inspired by the likes of Karl Marx, Josef Stalin and Saul Alinsky. Just ask the president. The president and his followers have studied these thinkers. These philosophers believe in building their philosophy by destroying others'. Today's liberals are more revered for their ability to tear down people like George W. Bush, Paul Ryan, Glenn Beck, Sarah Palin and Rush Limbaugh than they are for accomplishing anything positive.

Under the regulation of liberals, our financial system collapsed and we now head more and more towards government control over our economy. Punishing, over-taxing or over-regulating honest businesses or destroying the capitalist environment in which they flourish is not the answer. If an incompetent, corrupt and insolvent government regulated the private sector into incompetency, corruption and insolvency, what makes anyone think the government is still the solution?

We must remember, many of these banks failed because of government regulation, not because of the lack thereof. Government forced them to write bad loans. We must consider how many businesses fail because they are overly regulated or because they were destroyed by ruinous legal proceedings that occurred in the grey areas and fringes of the regulatory and legal tort system. These are the techniques liberals have been using to encourage the destruction of the capitalist system since the New Deal. They now call on their messiah to finish the job.

Because of capitalism's cyclical nature, recessionary periods are viewed as prime opportunities for the destroyers to come back out of their holes and repeat the same old Keynesian failures of the past. They bring their old style socialism dressed in a new style suit. Once again, they offer no new alternatives, just recycled garbage dressed as something different. 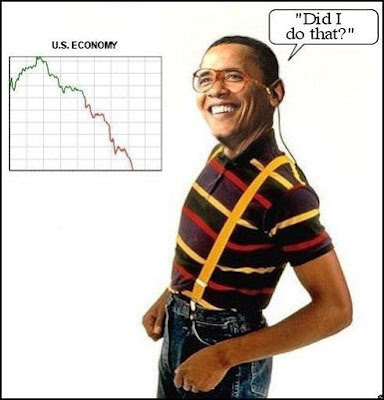 The stimulus plan has failed. That flushing sound you heard in 2009 was $800 billion dollars in stimulus money going down the drain. As Mark Levin said on his radio show Friday, we pissed that money away. The next flush you hear are jobs going down the toilet.

Conservatives are optimists. We believe in the American people and confidently await the day they wake up and reject this "Obamanation." We need not be seen as alarmists or fight out of fear that some how our great nation is going to fall, but we must realize deep down inside that's where we're headed if we don't stop Obama's radical agenda with a positive and courageous message that can capture those who are soon to be disillusioned. We can optimistically tell our fellow country men that there is a correct way to do things, and if we are willing to embrace the correct way of doing things, we once again can rise to the greatness we once were.

Rob Cunningham at American Thinker nails it dead on.

The Undefeated "brilliantly serves as a modern-day case study, and clearly illustrates how our agenda-driven news media, entertainment industry and political power brokers brazenly operate, in plain view and with cold-blooded intentionality, in a tireless attempt to destroy a very decent fellow citizen. When presented with basic facts, Americans will recoil in disgust."

Despite our election loss in 2008, we take solace in the words of Ronald Reagan: "Don't get cynical because, look at yourselves and what you were willing to do and recognize that there are millions and millions of Americans out there that want what you want, that want it to be that way, that want it to be a shining city on the hill."


UPDATE: It's ironic that I wrote about why our future is bright just as Sarah Palin wrote more substantly on the same issue. A great leader is someone who can take what I'm thinking and articulate it back to me in a better, more clear and concise form. Sarah Palin has given THE DEFINITIVE solution, a solution that she best articulates today:

Real hope comes from realizing how God has blessed our exceptional nation, and then doing something about it. We have been blessed with natural resources, hardworking entrepreneurs, and a Constitution that preserves the greatest form of government ever devised by man. If we develop those natural resources, allow our entrepreneurs to keep and invest more of what they earn, and adhere to the time-tested truths of our Constitution, we will prosper and endure.

She also describes the type of leader that we need. "We are in desperate need of real leadership..." She writes and talks of a leader as if it is someone other than her. The humility is frustrating. So, let's tell it to her straight. That leader is you, Governor Palin.
Posted by Patrick S. Adams at 5:31 PM