You Can Score This Thing By the Number of Hit Pieces

Bloggers and pundits alike have always looked for the magic indicator. With polls failing to provide accurate numbers prior to elections (let's pick Alaska at random as an example of this) and political analysts proving that there are more opinions along the vast ideological spectrum than there are facts to support those opinions, many are beginning to cast off the old illusion that you pretty much can tell who's going to win an election provided that the spread is greater than the margin of error. Yet there is one indicator that is becoming more accurate as time goes on: the liberal establishment hit-o-meter.

It seems for every article you read, you have to read another article to fact check it and then you have to fact check the article you used to fact check the original article. Busy minds trying to weather a recession, and even worse, simple minds who don't even know what  a recession is are getting snippets of information from here and there and then forming what they believe to be coherent arguments as to why they think the TEA Party is racist or why Sarah Palin could never become president.

But I, your humble blogger, have figured it out. And it's as easy as politics for dummies. It's called K.I.S.S. Keep it simple stupid. Too often, we enter into analyzing things a certain way because we ourselves were trained to analyze things by elitists who have convinced us through our Pink Floydian style education system that everything is complicated and that only the brains can get it.

When military units were in combat at night before the invention of night vision, they didn't pull out slide rules and crunch numbers to choose targets. They looked for flashpoints. You could spot the enemy by drawing their fire or seeing their lights and hitting the positions as they lit up.

When you want to determine the effectiveness of a Facebook posting or speech by Sarah Palin or if you want to know if the TEA Party is doing good or if Glenn Beck's rally went well, there is an easy way to do it. Look for the flashpoints.

When you see the hit pieces ratcheting up in the media and across the moronosphere, that should be a clear indicator that whoever is being attacked has hit the nest. It used to be when political strategists or partisan opinion writers were confronted with facts that didn't support their opinions, they would spin. But now they just outright lie. The real morons are the ones who buy the lies whether figuratively or literally by plunking down their money at a newsstand to purchase a Newsweek or a Vanity Fair.

Stacy Drake of Conservatives4Palin says it best.  "Lies are lies... Who wants to pay someone to lie to them?" Then she provides the answer. "The levels the media has sunk since to distort America's perception about [Sarah Palin], is perhaps something that psychology majors should consider a study in." I think theology majors ought to work on that Satan angle as well.

Rebecca Mansour told Tammy Bruce that whenever Sarah Palin has a good week or a great thing happens it's like "okay, here comes another one" with the hit pieces (listen at the 1:40 mark).


I hear there's some pretty ugly stuff right now coming out and what we predict, we always see a pattern. We've got some victories under the belt. Things are, things are going well, and then, then there is that public slam of us. So, we always expect what's coming.


When yellow journalism gets ratcheted up for a period of time over an individual or an issue it makes u wonder what's up? What's the threat?

This should explain why publications like Newsweek, Vanity Fair and American Prospect get drivel all over themselves whenever Sarah Palin does something that works like backing a longshot Senate candidate who wins or when the TEA Party or Glenn Beck hit a nerve with the truth.

From now on, we need to put a "Satan sticker" on every hit piece that is written. Let's flag these articles and pundits when they open their big fat mouths on television. Why? Because we're keeping score. The more hit pieces and drive-bys we see, the more we can tell we are winning.

How many points do all the other Republican contenders have right now? How many does Sarah have? According to my numbers, she wins the GOP nomination by a landslide. 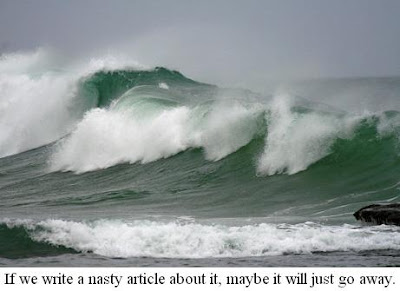