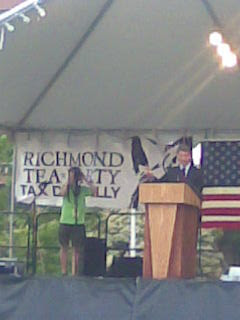 Ken Cuccinelli speaks at Virginia Tea Party
It was a strong turnout of Virginia patriots, many of whom have attended all three rallies since 2009.

There was strong criticism for the budget deal struck between Congressional Republicans and the Obama administration. There was a staunch "no compromise" statement from Jamie Ratke in opposition to raising the debt ceiling.

WRVA radio talk show host Doc Thompson MC'd the event, keeping a flow of opinions and speakers that struck the Tea Party tone of massive spending cuts and a return to Constitutional government. Thompson called on lawmakers to end deficit spending within two years, stating that the Paul Ryan Plan did not go far enough.

Sonnie Johnson quoted and referenced Frederick Douglass. So much for Tea Partiers being racist, a lie the mainstream press continues to use "objective media outlets" to push.

Ken Cuccinelli called Obamacare "illegal" because it mandated that Americans purchase a product ("can they mandate that we go to the gym?"). He pointed out that it wasn't about Obamacare; it was about liberty.

Cuccinelli referenced the shining city on a hill. He closed his speech with this Reagan quote:


Freedom is never more than one generation away from becoming extinct. Freedom is not passed down from one generation to the next through the blood stream. Freedom must be fought for and defended by each generation, otherwise you will be setting on your front porch in your old age, telling your children and your grand children what it was like to live in America, when men were free.

Cuccinelli appeared to pause, filling with emotion, before reading the line about telling your children what it was like when men were free.

Cuccinelli also referenced Reagan's quote "if it doesn't move, subsidize it" to explain why green cars that can't compete in the free market are getting financial incentives from taxpayer dollars.

It was clear that even though the Virginia Tea Party was strong and had brought forth its first Senatorial candidate in Jamie Radtke and featured an elected attorney general who was nominated at the Virginia State GOP convention after a successful campaign speech that was combined with a powerful floor demonstration which featured Gadsen flag waving supporters, that it recognized after three years of rallying in Kanawha Plaza that our country was even more in debt and further headed down the wrong path than it was in 2009 when the first rally was held.

Time is running out for the Tea Party movement. The future of fiscal conservativism and Constitutional government now rests on local elections in 2011 where the state legislature has to pass a property rights amendment to the state Constitution for the second year in a row as required by law and in 2012 where the ability to stop the U.S. government from becoming insolvent requires the taking of both the Senate and the White House.

There are those who think this may be  our country's last shot at saving itself from the destructive policies of big government. The Tea Party is no longer in a position where it can just recruit and grow. It is in a position where it must either win by 2012 or fade from effectiveness should the Democrats retain power after then.
Posted by Patrick S. Adams at 8:03 AM