The Defiance of Sarah Palin

It has got to be quite unnerving to liberals to see Sarah Palin still talking about "targeting" districts and "reloading" in the face of hot criticism that she is inciting violence. It seems the more they bring this up, the more she repeats those words. On Hannity last night she pointed that out. She explained that she's not going to stop saying it because people are not dumb - they know she is talking about the ballot box and not the battlefield.

Sarah Palin, the woman who was hammered on a regular basis by the mainstream media and the left wing blogosphere, could have easily thrown her hands up and went back to Alaska. After all, why would anyone want to deal with the nonsense if every time they stepped foot out of the house there was someone there talking smack about her kids, about her intelligence, about her lack of qualifications for higher office and about her self absorbed ambition. After all, she was writing a book, landing a sweet job on Fox News and giving speeches at $100K a clip.

A lesser person would have given the world the Italian salute, booked a week at a resort and partied on while the nation crumbled around them.

But not Sarah Palin.

Barack Obama was barely finished giving a joint news conference with his Russian counterparts before Sarah Palin just ripped him apart. Barack Obama sneezes the wrong way and there's a posting about it on Sarah Palin's Facebook page. She is relentless in her criticism and she is dead on optimistic about our country at the same time.

Given all the crap that she has had to take from the media, her opponents and in the blogosphere, it's only fitting that Sarah Palin is now going after Obama like a pitbull with lockjaw.

Those who tried to destroy her with a media smear campaign, bogus ethics violations and venemous blog posting after blog posting are about to understand what happens when you punch a kid in the face on the playground. Regarding Obama's nuclear policy, Palin told Hannity last night "[i]t's kinda like getting out there on a playground, a bunch of kids, getting ready to fight, and one of the kids saying, 'Go ahead, punch me in the face and I'm not going to retaliate.'"

Palin was not only punched in the face. She was beaten to the ground by the liberal bullies. She is up now and she is on offense. She is punching them in the face. It's only going to them hurt more and more.

Sarah Palin is a badass. She will own the playground where she was once bullied. 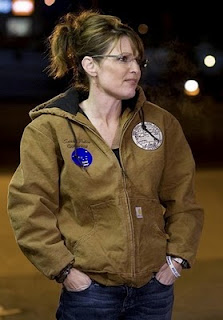 The last person who was that defiant took a wall down.
Posted by Patrick S. Adams at 10:03 AM